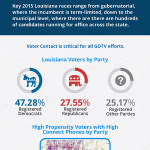 After 2014, you would think there might be some political respite in Louisiana. Lucky for you, 2015 will be just as exciting with races ranging from a gubernatorial tussle to several municipal battles.

Declared candidates for the election include John Bel Edwards, Minority Leader of the Louisiana House of Representatives for the Democrats and Senator David Vitter.

What you need to know about Louisiana post-midterms:

The majority of registered voters in Louisiana are Democrats, coming in at 47%. Republicans are in the minority with 27% , and 25% identifies with other parties. When you’re contacting your voters, be sure to know what their tendencies are by reviewing this map, which details the concentration of Democrats and Republicans throughout the state.

Learn more today about Louisiana’s voters and gear up for 2015 right now with VoterListsOnline.com.